As a creative movement director, Jeanefer is interested in the power of dance and movement as a non-verbal form of communication, and the power dance has to transform lives and attract and engage vulnerable groups who are often under confident and marginalised within society. She aims to create great dance work that is not only visually stunning but leaves large communities feeling proud to participate and hopefully inspire them to engage more in creative activities.

Jeanefer Jean-Charles is a freelance Choreographer, Movement Director and Executive Director of Tomorrows Men – an organisation established to tackle antisocial and behavioural issues in young men through dance. Jeanefer specialises in large-scale, mass movement choreography and her credits include Mass Movement Co-ordinator on all four London 2012 Olympic Ceremonies, large-scale commissions for East London Dance, Big Dance, and Greenwich + Docklands International Festival. The Opening Ceremony for Commonwealth Youth Games on Isle of Man; the Grande Finale for Bristol Harbourside Festival and Mass Movement Consultant for Merseyside Dance Initiatives Big Dance involving 1200 dancers in Liverpool. In 2012, Jeanefer choreographed Dancing Voices – a new dance film commissioned by East London Dance in partnership with Westfield Stratford City with over 100 dancers; a Tomorrows Men piece for 100 young men as part of the Cultural Olympiad; and worked with Walk the Plank on The Return of Colmcille written by Frank Cottrell Boyce as part of Derry-Londonderry City of Culture 2013.

Jeanefer plans to create more mass movement choreography commissions such as Opening Ceremonies in the future; expand Tomorrow’s Men; and set up artist development training on working with at risk young people and develop a brand for her own unique way of working.

A community dance film for Nottingham Playhouse. Translating Torvil and Deans Olympic Gold routine, off ice, creating short segments and filming each segment being performed by 25 different groups in Nottingham.

Developing a boys dance project in the boroughs of Ealing & Richmond. Targeting young men at risk of offending and  vulnerable boys in primary and secondary schools.

"Jeanefers track record of delivering work at the Commonwealth Games, Beijing Cultural Olympics and several other large-scale projects meant she was well placed to develop the artistic structure of this ambitious project.she inspired the artists and worked with dedication and accuracy to manage the large-scale nature of this project. Jeanefer brought in a clear methodology of documenting the choreography.

Jenny Tully, New Rush Hall's dance instructor, is so impressed by the results that she's hoping to work with Tomorrow's Men again. "When they performed on the day I couldn't believe it was the same boys," she says.

you have a brilliant eye for scale

Jean-Charles uses a juicily physical vocabulary. The result is simple and unpretentious 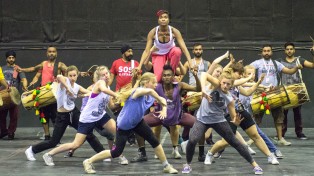