Apparitions is a movement and digital media installation directed by makeAMPLIFY and created and performed by residents of Stratford. Working from an empty shop in Stratford for 3 months, participants shared their experiences of the London 2012 Olympic Games and how it affected their daily lives. The resulting installation featured larger-than-life local residents video mapped onto the 45 metre chimney tower of Cofely District Energy Centre.

There was an accompanying commissioned audio soundtrack produced by danbeats which people could download on their personal mp3 players and listen to whilst watching the projection.

People were able to watch the projections after dark as part of the celebrations for the opening of the Queen Elizabeth Olympic Park on 27 & 28 July 2013. 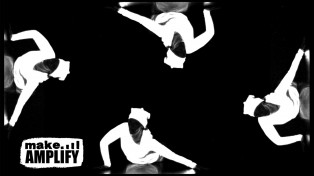