Announced as a creative artist for Coronation Concert 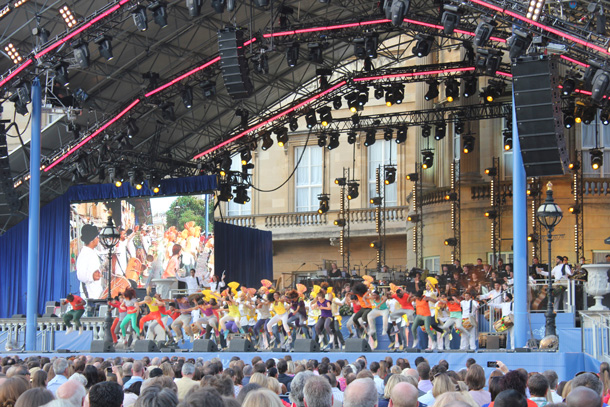 East London Dance announced as a creative artist at the Coronation Festival at Buckingham Palace this Summer.

The Royal Warrant Holders Association confirmed the names of artists that will take part in three magnificent Gala performances within the gardens of Buckingham Palace this summer. The Galas form part of the Coronation Festival – a unique public event hosted by the Association which will celebrate the very best of UK Plc.

The Coronation Festival Gala will encapsulate the Festivals themes of excellence and innovation with a particular focus on youth, in a celebration of the past 60 years of Performing Arts.

East London Dance has been announced as one of the featured performances at the evening Gala shows, having been specially commissioned by Big Dance. East London Dance is producing a large-scale work for the stunning site, inviting choreographer Jeanefer Jean-Charles to work with 100 dancers and 20 live musicians from the Dhol Foundation to create a spectacular outdoor dance show. Jeanefer was recently a Mass Movement Co-ordinator for the London 2012 Olympic Ceremonies team, and for this piece is collaborating with Johnny Kalsi from the Dhol Foundation (courtesy of WOMAD) to create a bespoke piece of dance and music that celebrates themes from across the Commonwealth.

Creative Producer, Polly Risbridger says:
It is a real honour to be invited to create a performance celebrating the 60th anniversary of the Queens Coronation. We cannot wait to bring an east London artistic edge and passion for life to Buckingham Palace with this spectacular piece. We want to surprise and entertain the Palaces guests, with an artistic, dynamic and celebratory performance that will demonstrate the talent and diversity in east London

East London Dance who is a lead hub for Big Dance, has a strong reputation for producing exciting high quality outdoor work. Over the past 25 years they have firmly established themselves as one of the leading producers creating dance experiences in unusual spaces.

East London Dance is dedicated to supporting emerging artists and for this unique event is working with talented dancers from Kingston University, Middlesex University, One Youth Dance, University of East London, &VP Entertainments.

The Gala concert will be staged in the Gardens of Buckingham Palace for three consecutive nights on the 11th 12th and 13th of July 2013, for an audience of 6,000 guests per evening thanks to the Coronation Festivals main event Partners, Jaguar Land Rover, GlaxoSmithKline, and Bentley who will each host one of the three evenings.

Tickets for the Coronation Galas have sold out but the Gala will be broadcast on TV and radio. Full broadcast details will be issued to the public soon.