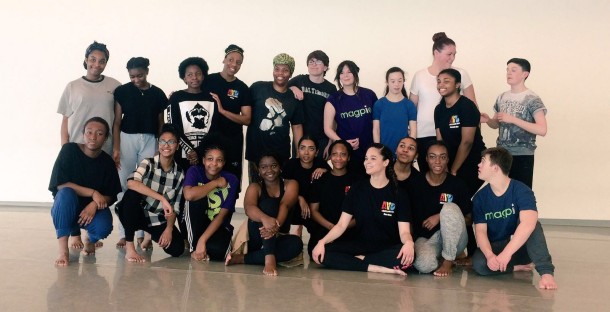 After weeks of rehearsals with their Lead Artist and choreographer Sara Dos Santos, the newly formed East London Youth Dance Company (ELYDC) took to the stage for their first performance together on Sunday 13 March at the U.Dance London Regional Platform.

The Company was part of a jam-packed day of workshops and careers-talks ahead of the performance including sessions in Parkour with Urban Playground and a fast-paced, eclectic workshop with Vicki Igbokwe (Uchenna Dance). We were lucky to be able to share these sessions with Artistry Youth Dance Company and dancers from Magpie Dance (Youth Technique Group) – it was a great opportunity for the groups to mix and get to know one another.

Despite the early start and busy day, ELYDC delivered a fierce and stunning performance of Redemption – a work that they have been developing with Sara since December 2015. Redemption will also feature as part of East London Dance’s Physical Justice Weekender, so if you missed them at U.Dance , you have another chance to see them in action!

Alongside ELYDC was a diverse and impressive programme of youth companies from across London with the majority competing to take part in the National Youth Dance Festival at the Lowry in Salford this July, Youth Dance England’s flagship event.

ELYDC received exciting feedback which we will be sharing with you very soon, so keep your eyes peeled for responses to their performance and don’t forget to form your own opinion by coming to see the Company at a range of events this year!