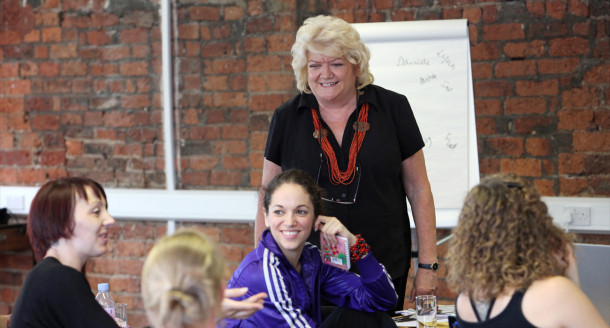 As part of the Dance Enterprise Hub we are offering a unique opportunity for 8-mid career artists to have individual mentoring and coaching to develop their creative careers with Anamaria Wills (CidaCo). Anamaria has extensive experience as a creative leader and consultant, working with a range of clients across the private, public and voluntary sectors. With Anamaria’s expertise this is a really valuable opportunity to supprt the development of some very exciting artists.

The selected artists are:

BirdGang is a Hip Hop Theatre Dance Company founded in 2005. This collective of multi-faceted artists aim to stimulate audiences through movement with their use of music, film and lighting design. BirdGang’s goals are not just to entertain but also to explore social issues through dance. Credits include: A Harlem Dream, Streetdance 3D 1 and 2 and the BRIT Awards. BirdGang are an associate company of the Young Vic.

Natasha Khamjani is a choreographer with versatile experience of performing behind her. Her signature is to fuse a variety of styles together with a strong and sometimes humorous narrative to create something spectacular. Culturally diverse fusions are her forte and have included Lindy Hop with Hip Hop and Folk Dance with Hip Hop. Credits include: Olympic Opening Ceremony, Rugby League World Cup and Big Dance. Natasha is co-artistic director of Folk Dance Remixed which performed at 27 different festivals in 2015.

Renaud Wiser is a choreographer and artistic director of Renaud Wiser Dance Company and founding member of New Movement Collective. Recently he has taken part in the rural retreat Future Leaders in Dance in DanceEast and a residency at the Barbican with New Movement Collective. Renaud is currently creating new work with Verve for their 2016 touring season. Credits include: Who Killed Bambi? Ballet National de Marseille, The Gothenburg Ballet and Rambert.

Sara Dos Santos is a London based independent movement artist and choreographer. Following a successful career as a performer Sara commenced her career as a choreographer in 2011. Her thought provoking and emotionally charged work incorporates a variation of urban contemporary styles and raises awareness to social and political issues. Sara’s most recent piece ‘Frontline’ commissioned by Let’s Dance Festival and Newham council raises awareness against human trafficking and child prostitution; inspired by an outreach project to Brazil in 2013. Other credits include: Olympic Opening Ceremony, ‘Doing it for the girls’ International collaboration (Brazil) and Dead or Alive (tour. Awards include: Dancers Career Development, Retaining Grant and One Dance UK.

Selma Nicholls is currently the Tottenham Producer at LIFT responsible for the planning and delivery of the participatory strategy. Selma established Creative Engagement a talent and artist development agency in 2009, working with young people using dance and theatre. Selma was recently appointed mentor for Women of the World festival, International Day of the Girl 2015, a UN initiative to recognise girls’ rights and the unique challenges girls face around the world.

Tim Casson has performed and taught extensively for Jasmin Vardimon founding the JV2 Professional Development Certificate. Casson leads education projects at various levels for a wide range of dance organisations. including Sadler’s Wells. As a choreographer Tim created the world record breaking project The Dance WE Made and directs his company Casson & Friends creating work with a focus on collaboration, interaction and joy. Tim is an associate artist at Pavilion Dance South West.

Vicki Igbokwe is the founder and creative director of Uchenna Dance aiming to empower, entertain and educate audiences, participants and partners with work that reflects the multiculturalism of British society. Vicki is also an empowerment coach supporting women to create the life they want to live through one to one mentoring and group empowerment workshops. Credits include: Youth Artistic Director at Impact Dance, Nike, Olympic, Paralympic and Commonwealth Games.

Next post:
Leap of Faith and Dance to Health perform at first National Arts in Health Conference & Showcase
Previous post:
Announcing our Ambition for Excellence Award